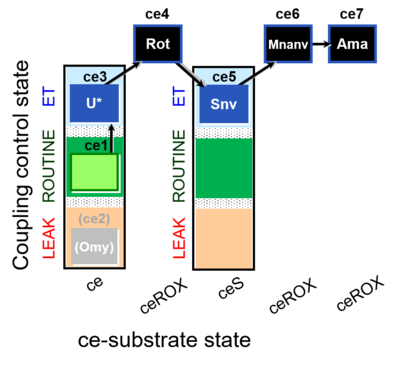 In SUIT-003 O2 ce D060 protocol, the use of permeable succinate and malonate allows to obtain further information about the mitochondrial respiratory capacities in living cells. The plasma membrane-permeable compounds NV118/MitoKit-CII (Snv) and NV161/MitoKit-CII (Mnanv) require cleavage by esterases present in the cytosol to release respectively succinate and malonate, which will happen therefore only in living cells with intact plasma membrane. The use of Snv after rotenone provides information about the S-pathway in physiological conditions. Rotenone inhibits Complex I and consequently the TCA cycle and respiration in living cells, but intracellular release of succinate from the permeable compound may lead to stimulation of respiration. Afterwards, the addition of Mnanv will counteract this effect. Moreover, the SUIT-003 O2 ce D060 protocol allows to evaluate the coupling control of living cells. Respiratory capacities are tested in a sequence of coupling states: ROUTINE and Electron transfer pathway. Optionally, to study LEAK respiration, the phosphorylation system might be inhibited by oligomycin. The final concentration of oligomycin has to be carefully optimized for various cell types, to minimize the inhibitory effect on the electron transfer system which would lead to an underestimation of ET capacity. 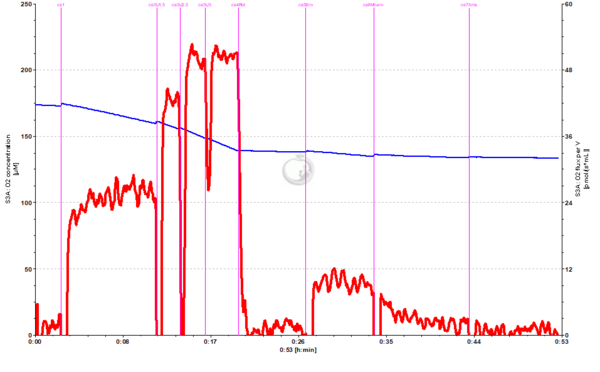 + Addition of NV118/MitoKit-CII (Snv) and NV161/MitoKit-CII (Mnanv) allow studying the S-pathway in intact cells.
+ This is a cell coupling-control protocol that provides information on ROUTINE and ET.
- This protocol is provided without oligomycin addition. To also include LEAK in the protocol, an event for the addition of oligomycin and a related mark can be added by editing the DLP file, creating a DLPU. However, the addition of oligomycin has to be carefully tested to avoid inhibitory effects in the evaluation of the ET capacity.
- Careful washing is required after the experiment to avoid carry-over of inhibitors and uncoupler.

Suggested stock concentrations are shown in the specific DL-Protocol.