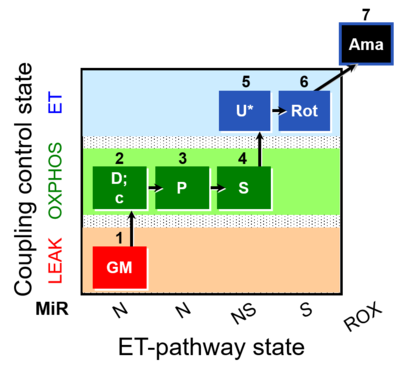 The SUIT-014 O2 pfi D042 protocol is designed for tissue fibers that display a preference for glutamate & malate (GM) over pyruvate & malate (PM) to support NADH-linked respiration. Adding pyruvate in the OXPHOS state enables to check if NADH-linked respiration can be further stimulated to determine N-pathway P capacity. SUIT-014 protocols provide an assessment of the coupling control L- P with NADH linked-substrates (GM) and P- E with N- and S-pathways combined (PGMS). The pathway control in OXPHOS state (N, NS) and ET state (NS, S) is also evaluated, covering the contribution of two pathways which are most important in the mitochondria of many species, tissues and cell types. Permeabilized muscle fibers are sensitive to oxygen supply due to limited diffusion of oxygen to the fiber bundle core. To counteract this limitation, hyperoxic conditions (400-250 µM O2) must be employed. To set the optimal oxygen concentration in the O2k-Chamber, see Setting the oxygen concentration. 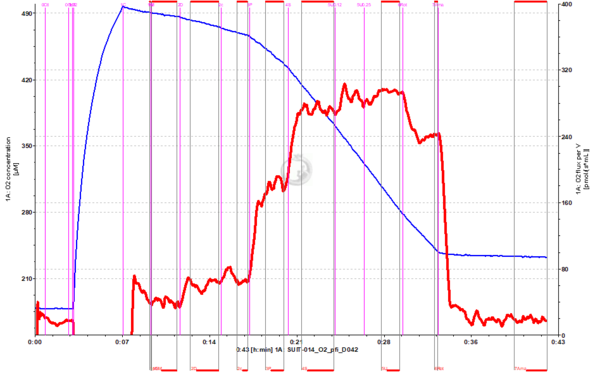 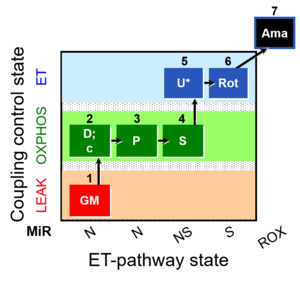 + NS-OXPHOS capacity provides a physiologically relevant estimate of maximum mitochondrial respiratory capacity.
+ The presence of PGM and S establishes fully operative TCA cycle activity.
+ This protocol allows to analyse the convergence of pathways at the Q-junction (N, NS, S).
+ Mitochondrial oter membrane integrity can be measured with the addition of cytochrome c. Application of the cytochrome c test early in the protocol ensures comparability of all states in case of any effect of c.
- It was observed that addition of P (5 mM) after GM inhibited respiration in horse skeletal muscle fibres (Votion et al 2012), which was not the case when P was titrated in steps of 1 mM.
- When evaluating the additive effect of the N- and S-pathway, it has to be considered that NSP- and NSE-capacities can only be compared with NP- and SE-capacities. This is not a problem when NSP = NSE (Gnaiger 2009). Otherwise, it may be assumed that SP = SE (Votion et al 2012), such that NSP can be compared with NP + SP. SUIT-004 should be chosen for the additive effect in the ET-state.
- Rox may be lower in substrate states earlier in the SUIT protocol. Therefore, this Rox measurement is frequently taken as a methodological control rather than as the final basis of Rox correction of mitochondrial respiration (mt).
- Careful washing is required after the experiment to avoid carry-over of inhibitors and uncoupler.
+ This protocol can be extended with the Complex IV module, which can prolong the experimental time with ~30 min.