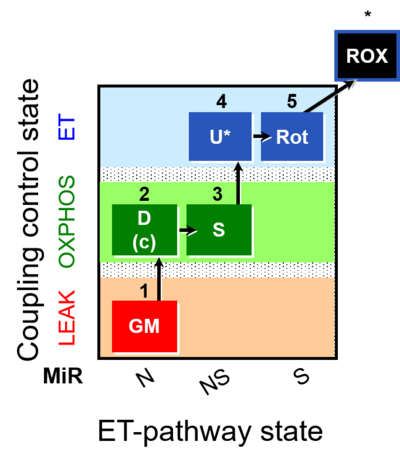 The SUIT-011 protocols are designed to study physiologically relevant maximum mitochondrial respiratory capacity (OXPHOS with NS substrates) and coupling/pathway control states. SUIT-011 gives information of the linear coupling control (L- P) with NADH linked-substrates (GM). GM and PM yield practically identical fluxes in human skeletal muscle fibres. However, PM is the superior alternative to GM, since the fractions of the N-pathway is lower and of the S-pathway is higher with GM compared to PM. PM, therefore, yields a more sensitive assay for the diagnosis of injuries in the N-linked pathway (compare SUIT-001 and SUIT-004). Moreover, SUIT-011 allows the evaluation of the coupling-control state (P- E) with NADH and succinate linked-substrates (NS) and the pathway control in OXPHOS (NS) and ET state (NS and S). SUIT-011 can be extended with the CIV assay module. 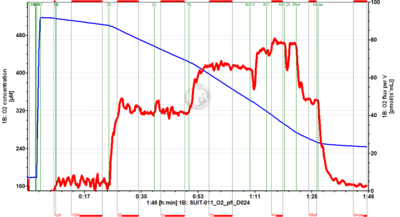 + NS-OXPHOS capacity provides a physiologically relevant estimate of maximum mitochondrial respiratory capacity.
+ Glutamate is easier to prepare compared to pyruvate.
+ Application of the cytochrome c test early in the protocol ensures comparability of all states in case of any effect of c.
+ Reasonable duration of the experiment.
- GM and PM yield typically identical fluxes in human skeletal muscle fibres. However, PM is the superior alternative to GM: the fraction of the N-pathway is lower and of the S-pathway is higher with GM compared to PM (GMP is inhibited by the CII inhibitor malonic acid to a larger extent than PMP). PM, therefore, yields a more sensitive assay for the diagnosis of injuries in the N-pathway, since an impairment of N-pathway capacity can be compensated partially by activation of the S-pathway. This is a disadvantage compared to SUIT-004 and SUIT-008 for diagnosis of N-capacity.
- To detect an additive effect of P after GMP, pyruvate would have to be added as step 3 (before S). However, inhibition of respiration was observed after titration of P (5 mM) in horse skeletal muscle fibres (Votion et al 2012), which was not the case when P was titrated in steps of 1 mM.
- When evaluating the additive effect of the N- and S-pathway, it has to be considered that NSP- and NSE-capacities can only be compared with NP- and SE-capacities. This is not a problem when NSP = NSE (Gnaiger 2009). Otherwise, it may be assumed that SP = SE (Votion et al 2012), such that NSP can be compared with NP + SP. SUIT-004 should be chosen for the additive effect in the ET-state.
- Rox may be lower in substrate states earlier in the SUIT protocol. Therefore, this Rox measurement is frequently taken as a methodological control rather than as the final basis of Rox correction of mitochondrial respiration (mt).
- Careful washing is required after the experiment to avoid carry-over of inhibitors and uncoupler.
- CIV activity is not measured, to save experimental time.