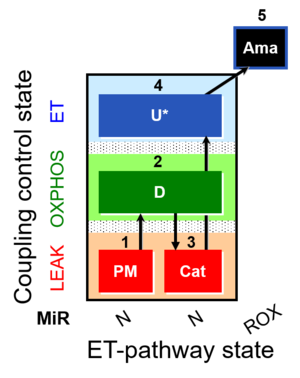 SUIT-006 MgG mt D055 is a protocol to investigate the O2 flux and mitochondrial ATP production using the fluorescent dye Magnesium Green. In this protocol, the NADH Electron transfer-pathway state can be analyzed in mitochondrial preparations such as isolated mitochondria, tissue homogenates and permeabilized cells (already permeabilized when they are added to the chamber). Addition of the substrates pyruvate & malate (PM) to the mitochondrial preparation leads to LEAK state, and further addition of ADP induces the OXPHOS state, in which respiration is coupled to ATP production. After ADP addition, the signal from MgG gradually decreases, reflecting the ANT-mediated exchange of ADP for ATP, the later one having higher affinity for Mg2+. This exchange is stopped by addition of the ANT inhibitor carboxyatractyloside (Cat), which leads to LEAK state. With the addition of uncoupler, the Electron transfer pathway state can also be assessed in this protocol.

In the DatLab software, SUIT-006 MgG mt D055 DLP file is currently provided for the category N(PM). For using this protocol with other substrate/inhibitor combinations (e.g. succinate and rotenone for Succinate pathway control state or PMS for NS-pathway control state), a personalized DLPU can be created.

+ In this protocol, ATP production in OXPHOS can be assessed in parallel with respiration. The protocol also allows to analyse the coupling control (LEAK, OXPHOS and ET respiration) in the same ET-pathway control state.
- This protocol does not include internal ET-pathway control steps.
- Even though MgG seems not to inhibit respiration in isolated mitochondria, it is recommended to do an experimental control in the absence of the fluorescent dye to check for inhibitory effects. The following protocol can be used: SUIT-006 O2 mt D047.
- The test for mitochondrial outer membrane integrity with cytochrome c cannot be performed together with MgG assays.