Fumarylacetoacetate hydrolase (FAH) domain-containing protein 1 (FAHD1) was identified in a proteomic screen for senescence-related proteins in mitochondria. FAHD1 is a mitochondrial metabolic enzyme which can both hydrolyze acetylpyruvate and decarboxylate oxaloacetate, a metabolite of the tricarboxylic acid (TCA) cycle. FAHD1 is the first described eukaryotic oxaloacetate decarboxylase, and recognized as the antagonistic player of pyruvate carboxylase [1,2]. The position of FAHD1 at the crossroads between carbohydrate and fatty acid metabolism and at the entry of the TCA cycle suggests that FAHD1 plays an important role as a metabolic regulator. The role of FAHD1 in mammalian cells remained elusive. In the present communication, we have explored the effects of lentivirus mediated silencing of the FAHD1 gene in Human umbilical vein endothelial cells (HUVEC) [3]. Moreover, it is known that the FAHD1 gene is amplified in a subset of human breast carcinoma, and that the FAHD1 expression is higher in breast cancer tissue than in normal breast tissue (Human protein atlas). This fact suggests a potential role of FAHD1 in breast cancer metabolism to sustain proliferation and/ or survival. To address this question, FAHD1 knockdown (KD) was induced in the human breast cancer cell line MCF-7.

To approach the functional requirement for FAHD1, lentiviral vectors were used for knocking down endogenous FAHD1 protein by shRNAs. FAHD1 was downregulated in HUVEC, cultured in endothelial cell growth medium, containing no pyruvate and no L-glutamine. At day 7 post infection, the effects were examined. Cell proliferation and apoptosis were explored by counting the cell number, and flow cytometry analysis by BrdU incorporation and AnnexinV-PI staining. Cellular senescence was pointed out by positive senescence-associated ß-galactosidase (SA-ß-Gal) activity. The expression of several molecular markers and proteins was screened by Western blot. To address the mitochondrial function, mitochondrial membrane potential was analysed by JC-1 staining by flow cytometry. Further, extracellular flux analysis was performed by Seahorse XFp using the Cell Mito Stress Test Kit. To investigate the effects of silencing of the FAHD1 gene in cancer, FAHD1 was downregulated by lentivirus infection in the breast cancer cell line MCF-7. Cells were cultured in DMEM containing both, pyruvate and L-Glutamine or none. Cell number was checked at day 7 post infection.

In this study we report the identification of FAHD1 as a novel player in the regulation of proliferation and cellular senescence. The depletion of FAHD1 in HUVEC resulted in a reduced cell proliferation shown by a reduction of the cell number (Figure 1 A). This was confirmed by a decreased BrdU incorporation and no difference in apoptosis (Data not shown). Interestingly, the limit in proliferation could be partially rescued by aspartate supplementation (10 mM). Further, the deficiency of FAHD1 induced premature senescence (Figure 1 B-C) and inhibited mitochondrial energy metabolism (Figure 1 D-E). FAHD1 depleted cells had an increased SA-gal activity (Figure 1 B), and were negative for γ-H2AX, indicating that FAHD1 depletion was not accompanied by DNA damage, although the p53/p21 tumor suppressor pathway was triggered (Figure 1 C). Further, FAHD1 depleted cells had a reduced MMP, shown by JC-1 staining (Figure 1 D). By metabolic flux analysis (Seahorse), it was found that FAHD1 depleted HUVEC had a decreased oxygen consumption rate (Figure 1 E). In addition, depletion of FAHD1 in the breast cancer cell line MCF-7 revealed an inhibition of cell proliferation right up to cell death when L-glutamine and pyruvate were omitted (Figure 2 A-B).

To conclude, we found FAHD1 as a novel player in regulation of cellular senescence. The depletion of FAHD1 from human endothelial cells inhibited mitochondrial energy metabolism and subsequently induced premature senescence. Thus, these results indicate that FAHD1 is required for mitochondrial function in human cells and support the evidence that mitochondrial dysfunction can induce cellular senescence by metabolic alterations independent of the DNA damage response pathway. This special distinct form of senescence can be referred to as mitochondrial dysfunction associated senescence (MiDAS) [4]. All in all, these findings reveal a new connection between function of the mitochondrial electron transport chain and cellular senescence, and reveal FAHD1 as a potential target for intervention in age-related conditions. Generally, targeting mitochondrial metabolites and enzymes may provide new avenues for cancer treatment. These findings suggest that MCF-7 cells are dependent on an intact mitochondrial electron transport chain, when the carbon source for aspartate, L-glutamine, is missing. Together these results reveal the potential of FAHD1 as a pharmacological target in selected tumour diseases. Taken together, these results highlight a potential role of FAHD1 as a novel target in aging and cancer research. Regardless, further research will be required to confirm the hypothesis that FAHD1 is required in human cells to maintain mitochondrial function, enable lipid synthesis and subsequently proliferation. 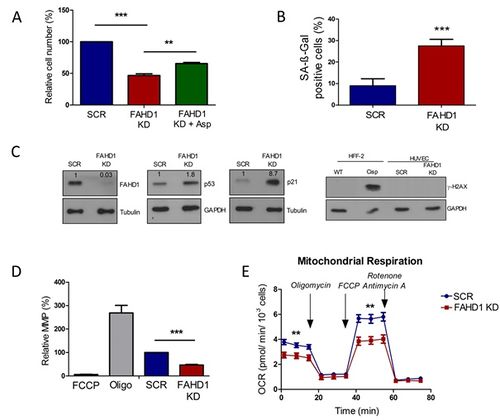 Figure 2. Depletion of FAHD1 in the breast cancer cell line MCF-7 leads to a decreased proliferation rate right up to cell death when L-glutamine and pyruvate were omitted. Western blot showing the expression of FAHD1 (A). Cell proliferation of MCF-7 cells (B).

Retrieved from "https://wiki.oroboros.at/index.php?title=Petit_2017_MiPschool_Obergurgl&oldid=155052"
Category:
This page was last edited on 26 March 2018, at 13:10.
This page has been accessed 5,651 times.
Privacy policy
About Bioblast
Disclaimers