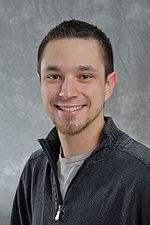 Reductions in ATP production by oxidative phosphorylation and glycolysis have been observed in many neurological diseases including Alzheimer’s disease (AD) [1]. One of the known risk factors for the development of AD is the inheritance of a specific genotype of a lipid transporting protein known as apolipoprotein E (ApoE). How ApoE contributes to the development of AD is poorly understood [2]. The purpose of this study was to determine if the lack of ApoE leads to mitochondrial dysfunctions. Mitochondrial bioenergetics were investigated in mice that lack ApoE (ApoE KO) and in wild-type mice. Since AD develops with age, mitochondrial performance was studied in both old (12-22 months old) and young mice (4-6 months old).