Carbonic anhydrases (CAs) are metalloenzymes present in all prokaryotes and eukaryotes. These enzymes catalyse the conversion of CO2 to HCO3- and H+. This reaction is involved in multiple physiological processes [1]. CAs have been identified in the reproductive tract of various species [2,3], but their precise physiological roles in the male reproductive tract is still unclear.

Herein, we determined the impact of CAs inhibition with acetazolamide, a general inhibitor of CAs, on the metabolism (by means of nuclear magnetic resonance spectroscopy), and on the mitochondrial morphology (by means of electron microscopy), biogenesis (using quantitative reverse transcriptase polymerase chain reaction) and bioenergetics (using the fluorescent probe JC1) of primary cultures of human Sertoli cells (hSCs), obtained from biopsies from men with conserved spermatogenesis.

When CAs were inhibited in hSCs (by exposure to acetazolamide during 24 hours), we observed a decrease in the number of mitochondria and an alteration on their morphology (Figure 1) though the average mitochondrial membrane potential was not affected. Still, cells treated with acetazolamide exhibited an accumulation of cytoplasmic lipid droplets, suggesting a diminished mitochondrial function. In fact, when assessing the expression of mitochondrial biogenesis markers, we observed a striking decrease in the abundance of HIF-1α, Sirt1, PGC-1α and NRF-1 mRNAs, when CAs were inhibited (Figure 2). All these mitochondria-associated alterations were accompanied by an increased production of lactate and alanine (although the consumption of glucose was maintained) indicating a reduced conversion of pyruvate to acetyl-coA, possibly due to the diminished mitochondrial function.

Our results suggest that, in hSc, CAs are essential for mitochondrial biogenesis, morphology and physiology. Since Sertoli cells are essential for the occurrence of spermatogenesis, CAs should play an important role in the establishment of male reproductive potential. 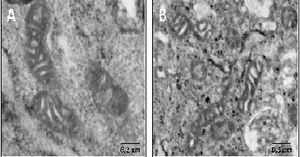 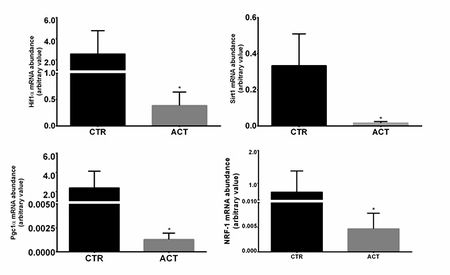 Figure 2. Decreased mitochondrial biogenesis in human Sertoli cells (hSCs) with inhibition of carbonic anhydrase by acetazolamide (ACT). When hSCs were treated with ACT during 24 hours presented a decrease in the abundance of HIF-1α, Sirt1, PGC-1α and NRF-1 mRNAs transcripts compared with group control (CTR). mRNA abundance was quantified by real-time PCR from a generated curve and normalized with β2-microglobulin. All results are expressed as mean ± SEM (n=6 for each condition). *Significantly different results (P<0.05) relative to CTR group.